99 Cents Only is bouncing back

Shop Way of consumption
That's good news for 99 Cents Only: after a struggling phase, efforts have paid off and the bargain stores chain is back to positive.

99 Cents Only and its 384 stores ended the fiscal year with quite encouraging prospects. Sales have been growing enough to reach a positive income of $5,5 millions. Considering their previous year had closed with an accumulated $10,9 millions loss, the least one can say is that it's a remarkable result. The company had to rethink a lot of things to get there, and hopefully these improvements will have a lasting impact. The stores have been refurbished, along with a “Go Taller” tactic: shelves have been raised by 18 inches. Not 17, not 19. Perhaps because 9+9=18. Anyway, the idea was to submit an improved customer experience. 99 Cents Only also augmented its product offerings in various ranges, developed seasonal merchandise and deals, added frozen food and meats permanent counters. Multi-price labelling played its part too. And last Christmas naturally was the peak of this whole renewal operation. 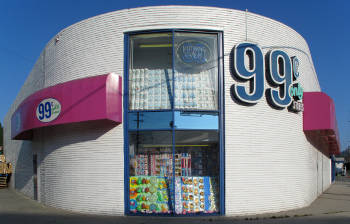 David Gold opened his first store in 1982, he was already 50 at the time. He had been thinking about a low-price retailing concept for a long time and ran a successful business for the next 30 years until he died, two years ago. The choice of “99” cents was the conclusion of the pionner's experience as a liquor store owner: when pricing items on sale, he quickly noticed that 99 cents was the hottest seller. Since cheap prices are frequently related to bad products in the common spirit, the stores had to be attractive, clear, clean, well ordered, and display goods of quality. 99 Cents Only's advertising campaigns became famous for their sense of humour and it gave the company a genuine and sympathetic image. Last but not least, every store opening has been traditionally celebrated in the same way since day one: a very pricey item is sold 99 cents to the first 9 customers, the 99 following persons getting rather great deals too. Keep an eye open if you're located in California: flat screen LCD TVs are the special feature for several opening in the next few days.

The Empire Mall is busy all year round but the holiday season brings something special to Sioux Falls' busiest retail center.

PepsiCo is a few weeks away from launching an intriguing project called Kola House. Located in the Meatpacking District in New York City, this experimental venue aims to become the new place to be.

Phatt Taco has made a spectacular comeback in August. The restaurant reopened its doors in a new space at 20 South State Street, Uptown Westerville – just a few metres from its former location.

For American Apparel right now, there is no other solution than closing stores and laying off employees: the company has to save $30 million.