Shop
The Gap, the once cool clothing brand is facing hard times and has to close 175 of its stores in North America. Europe is on the list too. 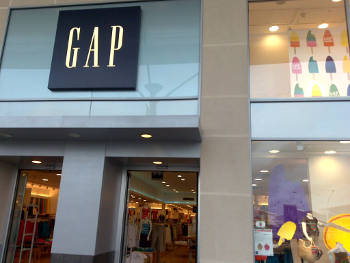 Created in 1969 and operating in 50 countries around the world, The Gap has long been considered as a reference in apparel, its basic style being synonymous with casual, simple but with an attitude, like its famous cargo pants. But the competition became really fierce when fast-fashion brands such as H&M or Zara emerged on the market. The Gap has been struggling to regain its place and became boring for the price. Cheap brands offer various styles for less money, customers tend to move faster than The Gap did and the retailer got stuck in its comfort zone.

"Returning Gap brand to growth has been the top priority since my appointment four months ago" said Art Peck, Chief Executive with a difficult challenge. To limit damages, the painful decision of closing stores has to be taken and was announced last month: The Gap will shut a quarter of its stores in North America. 140 closing will be effective this year followed by 35 more within the following years. This also means 250 positions to be cut at the retailer's offices. The closing of European stores is planned too, without further information at the moment. Let's hope this hard step is one towards recovery eventually.

Already well established across the US, the specialty grocery store plans some further openings in the coming months.

Target is Opening a Small-Format Concept Store near Downtown Boston

The good news is that Target is planning to open a new store in Beacon Hill in Boston. Now Beacon Hill locals can enjoy Target. This shop will be a small-format store. In fact, it will be 11,000 square feet.

Whole Foods Market wants to triple its locations in the US

A real Etsy shop at Macy's, in NYC

This is a world premiere: e-commerce website Etsy has opened its very first IRL shop. It's located at Macy's Herald Square, in New York City.