Shop Way of consumption
Two days ago, on May 30, Toys”R”Us started its campaign to benefit Alex's Lemonade Stand Foundation. This non-profit association collects funds to help find a cure for childhood cancer and support the families. Here's how you can help.

Born on the 18th day of 1996, Alexandra Scott was diagnosed with neuroblastoma just before her first birthday. At 4, she received a stem cell transplant and had to stay another few weeks in the hospital. That's when she decided to hold a lemonade stand in her front yard as soon as she would return home, so she could get money and "give it to the doctors to help other children too". Alex and her older brother raised $2,000. Her lemonade stand became an annual tradition in the Scott's front yard, and her story motivated supporters all around the country, then across the world, to hold a lemonade stand and send the money to Alex. Sadly, she passed away in August 2004. Her tenacity made her raise $1 million during her short life. But her wonderful work and dedication to fight pediatric cancer goes on through Alex's Lemonade Foundation, the organization her parents, Liz and Jay, started in 2005. 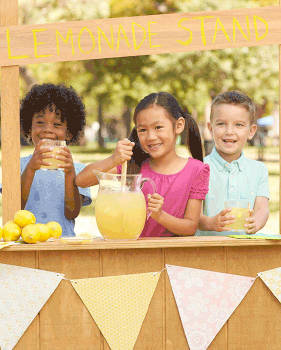 Toys”R”Us began its partnership with Alex's Lemonade Foundation in 2011 and the company has since collected from customers, employees and local communities, more than $8,5 million to contribute to Alex's foundation and help cancer research and the families affected. The toys retailer started its fifth ALSF campaign last Saturday and it will last for eight weeks, until July 31. If you want to be a part of it and support Alex's commitment, you can make a donation at any Toys”R”Us or Babies”R”Us stores nationwide, or online. You can also invade social media using #Stir4ACure (hope being the most important ingredient to stir in that particular lemonade) and @Toysrus to share the initiative. Of course, you can participate by hosting your own Alex's Lemonade stand in her name. Toys”R”Us pages on Facebook, Instagram or Twitter will regularly report on the fund-raising progress and the different ways to get involved in fighting childhood cancer that strikes more than 260,000 kids every year around the world.

Martha Stewart is sold but not gone

The world famous lifestyle guru, Martha Stewart, has just sold her company even though she will remain involved.

Imagine a magical place where you can have donuts and ice cream all in the same place. Well, if you’re anywhere near Pace, Florida, you’re in luck. That’s because Dunkin Donuts and Baskin Robbins are joining forces for your pleasure.

A new Lego store will be opening at Destiny USA, offering toys, events and opportunities for creative fun to children and their families across Syracuse, along with visitors from further afield.

Everyone who hears the name 'Warby Parker' immediately thinks of glasses and sunglasses in the New York area, and the brand has expanded to include a number of locations in the U.S. and Canada, and recently a completely new branch in Paramus, New Jersey.